This isn’t *quite* where I left off, but it’s close and there’s always a lot going on so here goes.

June 2017 was a typical for us – nutty. It’s always filled with camp, swim team, birthdays, our anniversary and prepping for vacation. It’s jam packed, flies by and is always a ton of (hot) fun.

This is pretty much where we were if we weren’t in someone else’s pool….Also, you’ve never seen anyone happier than PW when Sylvia the Swan finally flew away in a monsoon.

Also it was clearly the year of enormous floats.

This sweet little lady turned 8. EIGHT! This one really threw me for a loop. The slippery slope to 10. And then she’s driving. And off to college. I tell both of them at night, I squish their head and their feet so they stop growing so fast. 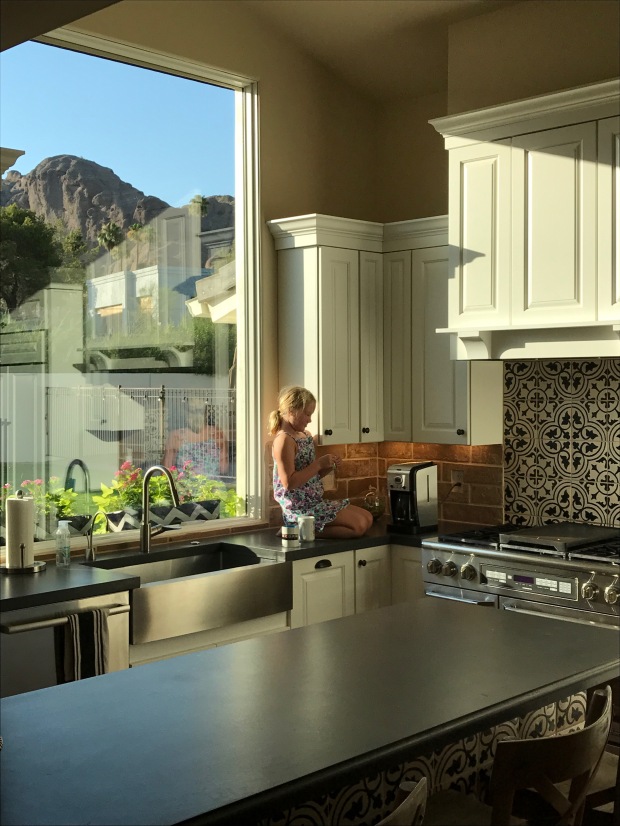 And in true Wand style, you get two parties; one on your actual birthday with family with a cake of your choice; this year she went for my triple yellow cake with homemade chocolate buttercream frosting. What it lacks in beauty, it makes up for in taste! (Also it was like 110 degrees and even in ac, butter melts so)….

…and one insane party with all your friends. 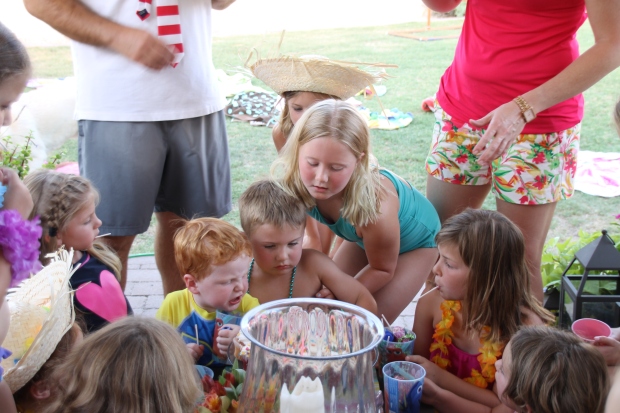 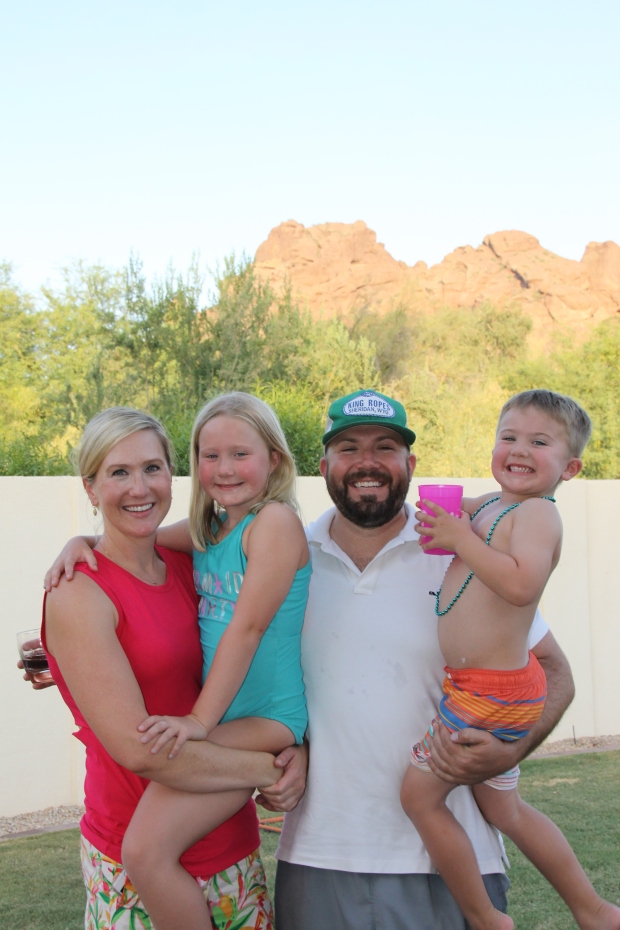 I don’t know why she’s mad, but those eyes kill me.

Someone else celebrated 35 years (😲) 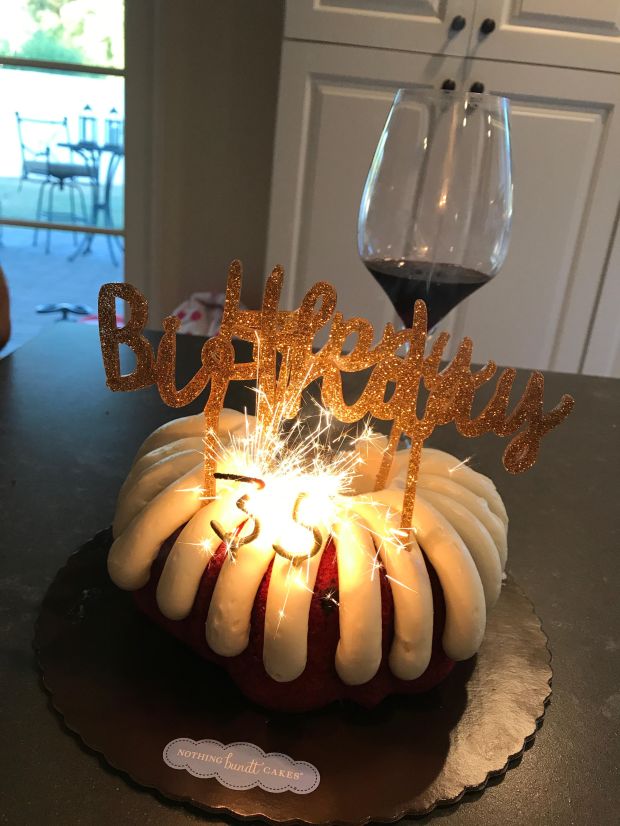 And we had friends celebrate birthdays in June too – including Abby who turned 8 right after B. Her amazing mom channeled her love of Target into a theme. And Target happily hosted it!! It was so much fun.

There was a lot of camp too. I couldn’t help but feel a little jealous following these two in every day. Not pictured; the stupid amount of crap from the snack bar that they ate and I allowed because they must have burned off thousands of calories each day. Or because I’m lazy. Either way, they had a ball.

*Do you see Auggie’s little ankle bracelet? And all 24 of Baylor’s? This was the summer that B really got into making bracelets – like the kind you do with the #4 knot over and over. Needless to say, the nostalgia was awesome and we tied bracelets until our eyes crossed and fingers bled.

And for our annual trip to Montana, we decided that splitting up with me flying with the kids while Peter drove with Mac was really not all that much easier. It was expensive and took almost the same amount of time. So we decided to ALL drive to MT! I have to say, it actually went much better than anticipated. The kids were awesome and we made it in two days. No one puked, we didn’t kill each other or lose anything out of the back of the truck – overall, it was a success! The return trip however…well that’s a post for July.

There is also a 75 pound dog in this picture. He’s laying on the floor with about 2 feet total to his name. And he does it like the saint he is. 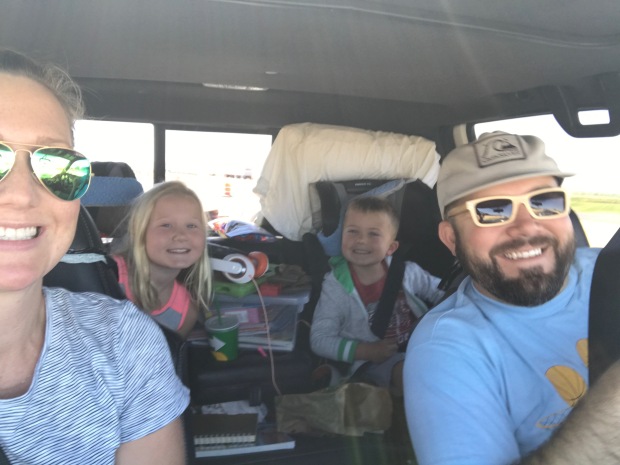 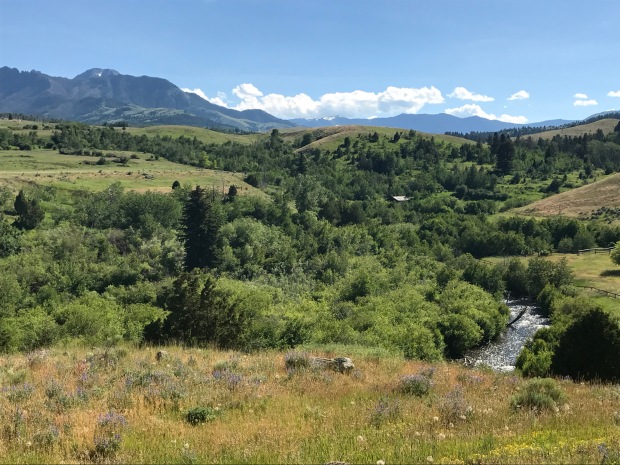