So this happened this weekend…

Much to our amazement, she nailed it 5 minutes after the wheels came off! It was far less traumatic than I thought it would be. Peter gets all the credit – I wasn’t even brave enough to go to the park until I heard it was going well. She even mastered starting herself by the time we left the park. Next up, turning.

And of course the little guy had to be part of it. He decided that he too needed a push. Do you hear him say “Me two three TOO!!” Translation: say one two three and push me too! I also love his glide and look back. Such a ham.

Wishing you and yours the very Merriest Christmas! We got the best surprise at Auggie’s school Christmas program last week – he sang! My money was on him crying his eyes out the entire time. But instead, he quietly sang along to 1 Little 2 Little 3 Little Reindeer and was particularly enthusiasic about the HEY! arm swing and all.

Sadly, his perfectly matched and pressed pants did not make it to the show. Sigh. Oh well. At least he was wearing pants, even if they were his back ups.

Please forgive my pictures – I was A. hiding from him and B. not using a flash so I didn’t distract them! 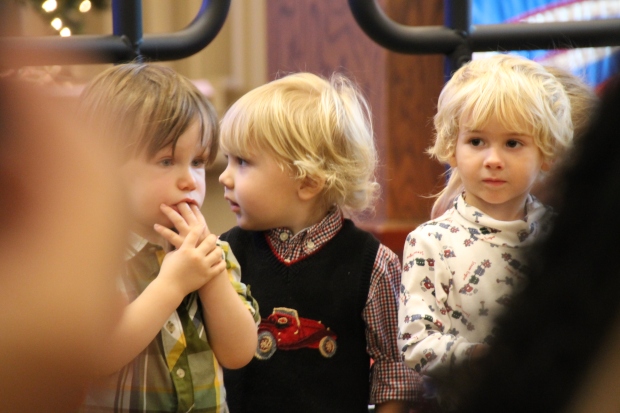 At this point my mom leaned over and said “Goodness they are tiny! I can’t believe B was this small at her first show!”. I dug around and sure enough, they were that small. It’s so cute to see all her buddies in these pictures were singing with her this year too.

This kid has never been shy a day in her life! 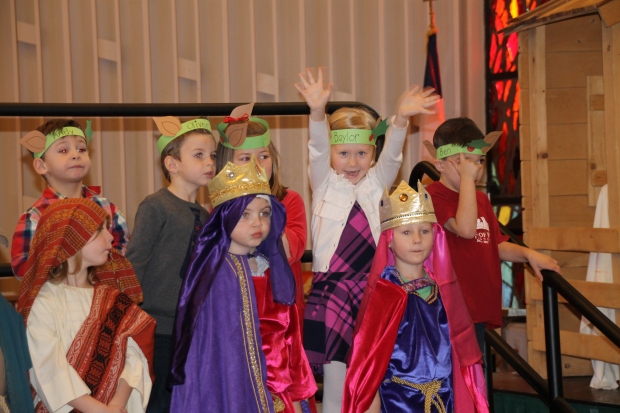 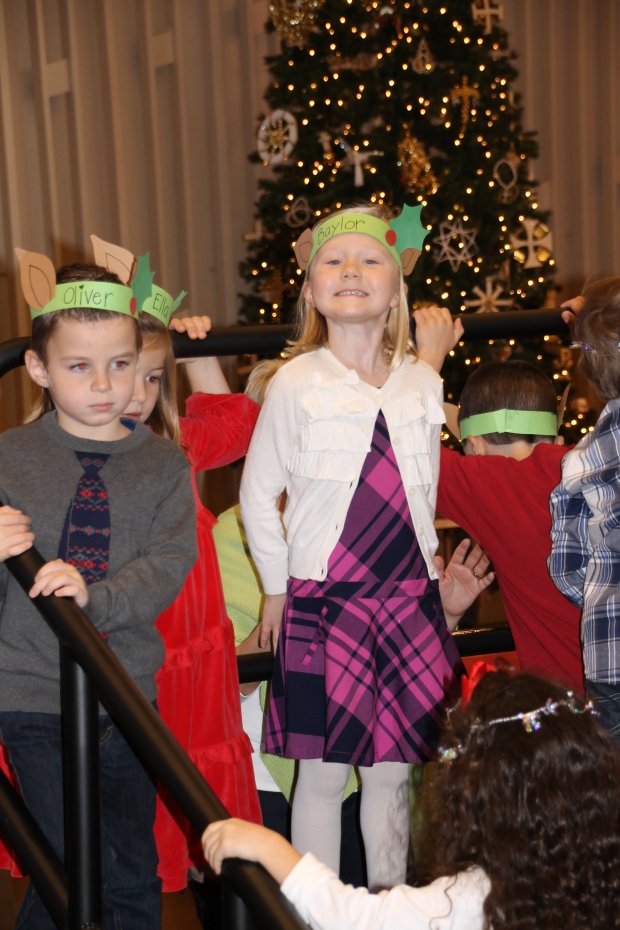 Singing her face off…

I distinctly remember the day that Baylor and I had our first two way conversation. She had woken up from her nap early and was standing in her crib, crying. As I opened the door, I asked her what was wrong. She pointed to her ears and said “Ears. Hurt.”. It was like Helen Keller signing water. It was amazing to speak to her and have her answer back!

With the Auggie boy, our conversations sound a little more like this:

Augustus. I’m. Right. Here. What do you need?

I would give that kid a pony if he said orssie peas, mommy. Dank you. It’s so stinking cute, I can’t stand it!

On a warm Saturday morning, I had one of those fabulous “this is so much fun” parenting moments.

I was standing on a baseball field in the hot sun, watching friends pull into parking spaces. Each of them had the windows down and the Frozen soundtrack turned up. Little hands reached out of windows waving. Little hands waved back from the field. Suddenly the bleacher bench was filled with smiling faces and little legs clad in baseball pants. There were matching pink helmets, pink bat bags, pink and black gloves. Water bottles were compared and shared. Dads shook hands, took roll and divided into groups. And we were off! T-ball season has begun! And I think we’re off on the road of many years of practices, games, heartbreak and fun. Bring it on, we’re ready.

Do you love these guys?! 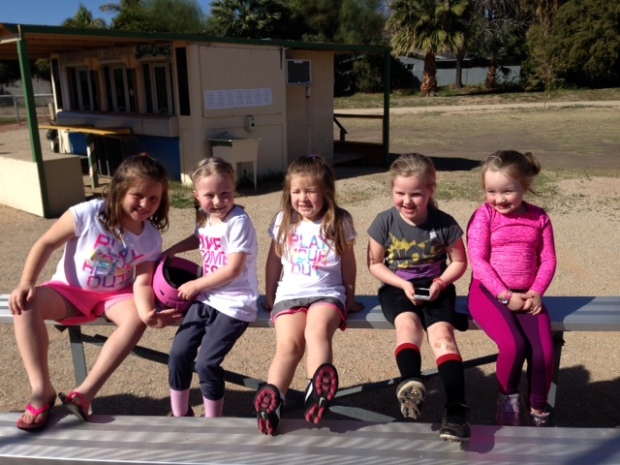 Thank you Diamondbacks for the great uniforms! Yea White Diamondbacks! (slight issue when you donate the uniforms to the entire league an every team is the same mascot…hopefully there will be enough colors to make it less confusing….)

This guy? Is having the time of his life. And thank goodness, because the other dads are terrified of taking the girls from the team. There was honest panic in their voices when he was in Montana. Herding cats would be far, far easier.

This guy kills me. His only goal during practice is to get on the field. He generally settles for sitting on the bench. I can’t take the cuteness.

Cheering on his sister 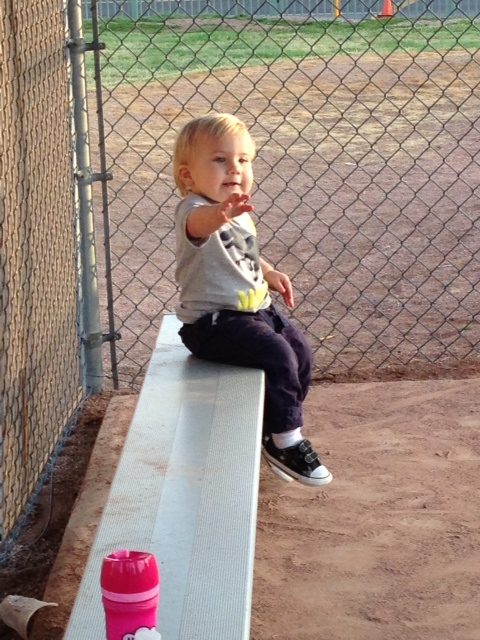 Sometimes you just need a friend who will sit under and umbrella and watch a movie with you. We’re grateful that M is that buddy to Baylor.

Or as Baylor says “Balentimes” Day.

When you’re 3 1/2, nothing says love and Balentimes like barnyard animals. I sent her to school today with 22 handmade valentines – almost all of them containing pig, horse and cow stickers. I didn’t realize what she was doing until she was a few in and then I thought they were cute! Only she could get away with putting pigs on valentines.

This is the one she made for me 🙂 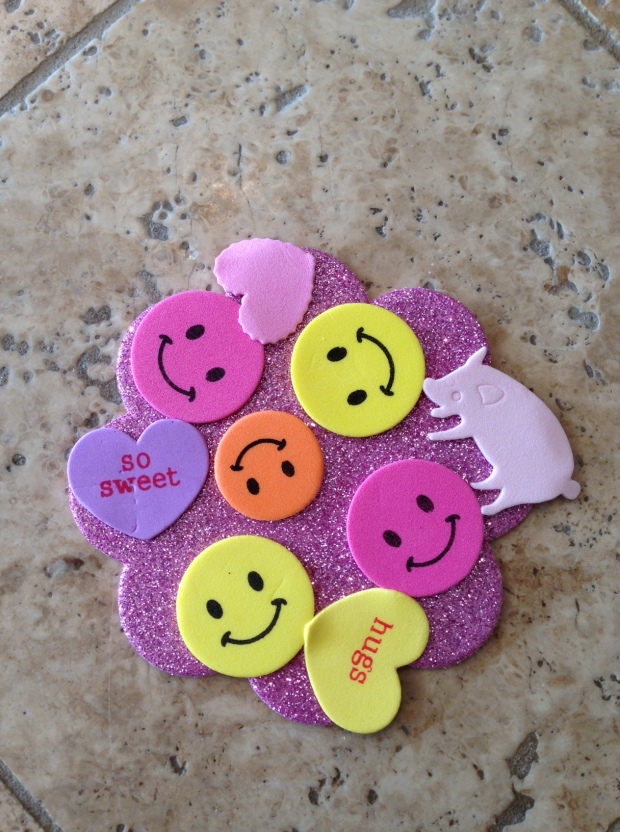 Getting some practice in on the couz’

This picture is my happy place. Happy girl reading a book on our front patio filled with flowers.