Monday afternoon I was busy in the kitchen throwing things in the slow cooker, making a week’s worth of smoothies for us and for Bay, whipping up Auggie purees and hard boiling eggs – pretty much anything that would keep us fed with something other than frozen pizza for the week. Baylor protested napping and Auggie woke up early from his so I asked them to play outside for awhile while I finished. For about an hour and a half, they wandered, played, whined, played some more and then finally got settled into a game they made up. Everyone played nicely and complaints turned to giggles and belly laughs.

The entire time I was having pangs of guilt for not being outside with them. It was like the devil on my shoulder was telling me that I was a horrible mom for not playing with my kids. I tried to convince myself too that we played by ourselves all the time as kids and we loved it! Peter has told me the stories of how he and his buddies would “hunt snakes” with the pool cleaning equipment in the desert for hours as kids. And he’s a fancy lawyer so it can’t be all bad, right?

That night I read this article on someone’s FaceBook page. It makes a great argument for letting your kids get bored. It talks about how bordem, unstructured playtime and the freedom to run amok teaches kids how to problem solve. How to make their own fun and how to be self motivated. It makes a great point that at some point in life, no one will be there to tell them what to do or how to do it. Playing alone now will start to give them the tools to think outside the box and learn to fix their own problems.

I used to spend hours in the yard, the trees and roaming our neighborhood. I had tree houses, forts, made mud pies, tied the dog to the wagon and made him pull us, dressed up the cat, and had Olympic events with our friends. I’m not sure if it made me a better person, but it did make me an excellent mud pie chef.

So as long as I’m making healthy, delicious meals, I won’t feel guilty. And I’ll feel just a little guilty when it’s for Real Housewives and Nutella on graham crackers.

Every morning after breakfast, I turn Bay loose to run amok and watch cartoons. Tuesday morning she was particularly busy – she was playing with her new toys and bouncing from room to room.

As PW was ready to head out, she grabbed her new Minnie Mouse rolling backpack and helped Peter carry his stuff to the car. When she got there, she told him that Minnie Mouse was in the bag and that she was going to work with him. She kissed him and Minnie and headed back into the house.

When he got home, he wheeled Minnie inside and Bay greeted them both with kisses. She began to unpack the bag – it was then I realized that not only had she packed Minnie in the bag, she had packed a tupperware full of play food, a dish towel and a blanket. She explained that Minnie needed a lunch, a place mat and her blankie for nap time.

I sat down and marveled at how thoughtful and sweet she had been. And when I hugged and kissed her for the 19th time, she looked at me as if I had lost my marbles – which only made it better that her thoughtfulness was second nature.

We recently purchased a bike seat for Baylie – I had seen the seat we wanted on other people’s bikes, but couldn’t find out what it was.  It attaches  right under the handle bars and so your kiddo is right in front of you. We finally figured out it’s called an iBert and we promptly ordered one – strategically combining our rewards program number, coupons, a gift card and a free shipping deal from Babies R Us. The verdict? It. Is. Awesome!! Not only do we love it, the kiddo loves it. It took about 10 minutes to install and is very comfortable. It’s not any harder to ride the bike and it’s easy to steer. The part I was most worried about was my knees hitting the seat and the reality is I haven’t bumped it once. It’s very easy to get B in and out and is very stable. So if you’re looking for a fun new way to get around with the munchkin, be sure to check it out: http://www.toysrus.com/product/index.jsp?productId=3006280 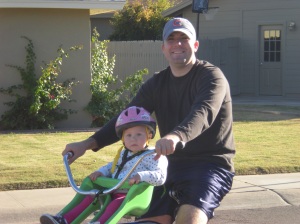 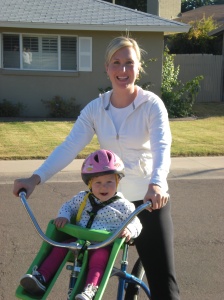 I knew this day was coming. I’ve been fighting it for months. But apparently now at 17 months, Baylie has won and so she no longer takes a morning nap.

Now, I know all the non-moms are saying “Yeah, so?”. But all the moms are giving me a solomn, sad and knowing nod. Because the end of a morning nap means there is only one nap in a day instead of two. The whole day’s routine now has to be adjusted and new events and activities planned to fill the void left by the lack of a nap.

Even though Baylor no longer needs that morning nap, I still very much want and need that morning nap! Well, nap time any way. It’s at that time I do crazy things like shower, dry my hair and attempt to look like a human, laundry, dishes, ironing, dog washing, house cleaning, blogging, bill paying, connecting with the outside world, etc. And other important things like go to the bathroom without an audience / assistant waiting to pull out the toilet paper for me.

The upside is that with this new phase of circadian rhythm is that Bay is content to entertain herself for longer periods of time. On a good day it  means she will play nicely in her room while simultaneously watching Baby Einstein and without taking a header off of anything. On a not so good day, it means this: 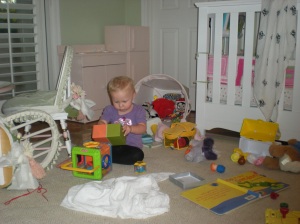 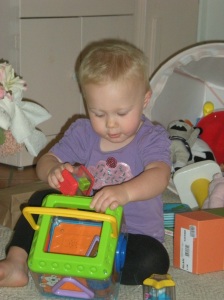 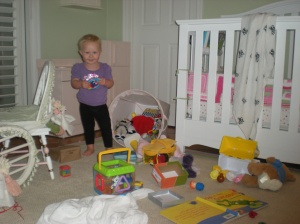 So farewell morning nap. You will be missed!!

I woke up to a phone call with a family member needing some obscure item at 6:30am. This would normally not be a big deal, except today for some reason, Baylie had slept past 6am and through PW leaving for work. And therefore I got to sleep past 6am, that is until the phone rang. The most annoying part? The person clearly knew I was asleep and didn’t say “hey, sorry I woke you up” just rambled on about what she needed and did I have it.

Peter has a big seminar today and left some notes at home so that was the second call at 7am. This shouldn’t have been a big deal, but the kiddo was crabbing in the background looking for more milk/banana/Bear and made it super fun to try to read off notes over the phone. She had also just tried to “help” feed the dogs and dumped an entire cup of food on the floor and in their water bowl.

Lastly, Baylie is teething, again. And because the lovely little tablets that make her less cranky have been recalled, we’re doing this cold turkey. She doesn’t want to eat, but is crabby because she’s hungry. She wants something, but doesn’t know what. She wants your attention so she is grabbing the remote off the counter, my purse off the chair and dumping it, and prank calling random people from my cell phone.

I’m hoping that a run to the park and some play time will help.  Or at least keep me alive until nap time…

I found this at Buy Buy Baby this week and it is a HIT – not only with Baylie, but with Bear. Naturally, Travis is throughly terrified. 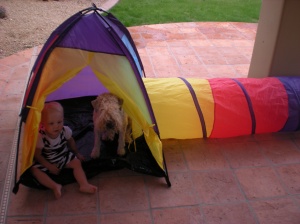 It is an awesome combination of a tent and a tunnel, what more could a 16 month old toddler and an 11 year old dog ask for?! They come apart and can be used separately and  inside or outside – or put the tunnel inside to get to the tent outside; the possibilities are endless. Also, the tunnel makes an awesome, vertical hiding place for Mommy – which is a huge hit with the kiddo. It’s the perfect excuse to get out and enjoy the fall weather – and at $19.99 plus your handy 20% off coupon (also, Buy Buy Baby will take Bed Bath and Beyond coupons!), a cheap way too.

Also – each of the pieces break down and fold flat – like your windshield cover. Easy storage – bonus! 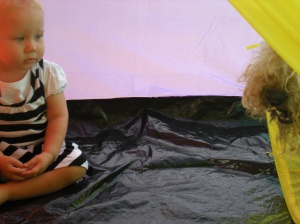 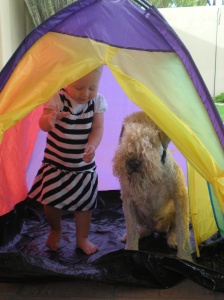 Bear Bear coming out of the tunnel 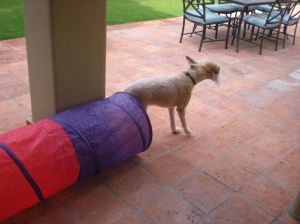 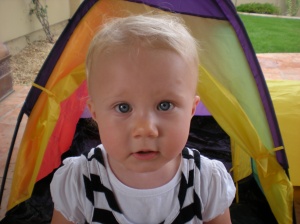