Last Sunday we headed out for our annual trip to Montana. We go to the (step) family’s ranch, Hubbard’s Yellowstone Lodge to ride horses, fly fish, hike, row a boat, eat, drink, watch B run around with her cousins and spend lots of time with my mom. It’s not a relaxing read a book on the beach vacation, it’s an action packed, fun filled whirlwind of a trip. And it is awesome.

For the second time, we flew out of William’s Gateway Airport on Allegiant Air. It’s a relatively new airline at an airport that has only recently become commercial. It’s much further than the main Phoenix airport, but we can fly direct to Bozeman and it’s a much better price than the major airlines. On this trip, we learned that discount airlines means more than limited flight times, paying for bags and seat choices, but it also means that when there’s a problem, you’re shit of luck.

Here’s a timeline of the events of last Sunday:

3:30pm – we get three bags checked, three carry ons, a car seat and a three year old through security with only one bathroom break and one change of clothes. Yes, 5 minutes into the trip, B has a minor accident. I should have recognized it as an omen.

4:00pm – flight to Colorado Springs is moved to our gate. Plane is loaded and takes off.

4:30pm – our scheduled departure time. However we are not on a plane because there is no plane.

4:45pm – a person who looks like they work for the airline cruises through the terminal. 25 passengers tackle him and ask why the board is still reading “on time”.

4:50pm – announcement is made that the flight is delayed until 8:30pm. Airline / airport employee promptly disappears.

8:45pm – I march to the other terminal, nab a counter agent and demand answers at our gate. Snivley little weasel waltzes to our gate where he informs everyone that he doesn’t know what’s going on. Why? Because he doesn’t work for Allegiant. In fact, no one works for Allegiant  in the airport. Allegiant employees work on the plans only, not in the airport. If we want answers, we have to go on line or call the customer service number.

8:50pm – security is called due to the amount of irate travelers.

9:00pm – announcement is made that the flight is now delayed until 10pm. Oh, and there was no plane coming at 8:30. They just told us that (seriously. That’s what they said).

9:15pm – another mom hosts a dance party for all the kids at the gate. I start crying at the thought that we might miss our vacation.

10:20pm – announcement that a flight has arrived and they are giving us the plane. 100 people rush to pack up and run to the neighboring terminal where we stand and wait.

10:45pm – plane is finally boarded and we are headed out.

2:00am – we arrive in Bozeman and the lovely, lovely people at Hertz rent a car are there waiting with our car.

*4:00am* – our tires hit the familiar dirt of Tom Miner Creek Road.

– we have a really, really, amazing kiddo. She never once cried, melted down or acted out. She was sweet, cooperative and a trooper. She smiled until she fell asleep on the plane, the car and finally in her pack n’play.

– check the incoming flight arrival time. If the plane you are supposed to take is late, you are going to be late too.

– over packing is essential when traveling with a munchkin. I wouldn’t let her play with her Minnie Mouse backpack leading up to the trip because I was loading it with new goodies. Little figurines, markers, coloring books, magnet boards, fun headphones, Goldfish, fruit snacks, suckers…a thousand things that might entertain her and every one of them came in handy!

– humanity is not all bad. I was shocked at how nice the other passengers were, especially to two wheelchair bound older ladies. I thought they were traveling with a group, but it turns out the people helping them were just kind strangers who offered to buy them dinner, a soda, walk to the bathroom or stretch their legs. Parents shared toys, snacks and entertainment with other kiddos. The same mom that hosted the dance party also set up their Ipad with a movie for all who wanted to watch. When the gate attendant announced that priority boarders would go first and then passengers with medical needs and parents, the crowd of exhausted passengers unanimously yelled back to take the two older ladies and the parents first.

– The entire time we waited I was drafting a scathing post in my head. I am decidedly NOT thrilled with how the situation was handled by Allegiant . But I can say that at least they did fly (they only fly twice a week to each destination – if we missed our Sunday flight, the next one wouldn’t have been until Thursday) even though it was horribly late.

– Allegiant has a lot of work to do to handle their customer service better (two phone calls later and there is no compensation offered. No discount, no free ticket, no nothing) including having gate agents who know what the hell is going on. So if you are going to be flying with them, check the flight info, have the customer service number in your phone and bring lots of entertainment!

Despite our freakishly late arrival, we had a great trip! And I have the nearly 200 pictures to prove it.

I remember being perplexed about this with Baylor, but my animosity towards the designer of maternity clothes has gotten worse this time around. Why the hell do all maternity clothes have bows, cap sleaves, ruffles or all of the above? Why are maternity shorts either of the baggy no shape variety or denim? Why must I dress like a 5 year old OR a redneck? Why doesn’t J.Crew have a maternity line?!

Oh. And don’t get me started on those assholes at Pea In The Pod. Their very nicely cut white shorts are SIXTY DOLLARS. I don’t spend $60 on any one item (ok, face cream. But really, that’s an investment in my future) why the hell would I spend it on shorts that I will wear for MAYBE 1 year total? Those jerks are trying to take advantage of my need for stretching waistlines and decent fabrics.

I mean I get it. I understand that some women want to cover up their arms or are in need of shapeless shorts to cover their posteriors. I was that lady (I tried on my postpartum shorts last week and they fell off while buttoned – Jen the trainer really had her work cut out for her) and there’s a strong possiblity that I’ll be that chick again. However, I have very strong intentions of keeping my sessions with Jen going, running and keeping my cookie cravings to a manageable amount (1 box is not a serving size). That said, until I balloon so the size of, well a balloon, I would like to look decent until the point where I wrap myself in a bed sheet toga style and call it a day.

See what I mean? 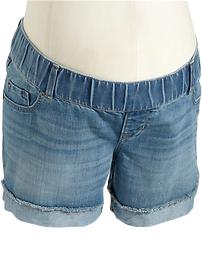 Ugh. The frayed cuff is a nice touch.

If I wanted to dress like Mrs. Dugger, I would grow my hair to my butt and move to Arkansas. Until then, no gracias.

Where to start? The pattern? The sleeves?  Bleh.

I guess where you see a need, it makes sense to fill it. I’m over starting a retail store though so if anyone out there is feeling ambitions, lets talk; I’ll design the clothes and the store, you run it and sell stuff – deal? Until then, I’ll be the lady hunting around Target and then running to the tailor to make me a decent wardrobe for the foreseeable future.

1. When it’s too hot to open the doors or windows. Which means every time I make a meal, the house smells like it for hours. And change hours to days when it involves turkey tacos or Brussels Sprouts with bacon.

2. The inability of some parents to master the parachute at The Little Gym. It is not complicated: grab handle, lift up, step forward and pull parachute behind you, sit down on handle. The result? A super cool tent like thing that is supported by the air trapped under the parachute. Call me a 2-year-old for thinking it’s neat, but it totally is. Which means I get mad like a 2-year-old when a mom can’t figure out how to follow 5 steps, thus letting out all the air and ruining it for everyone.

3. Caillou the cartoon. Not only is the kid annoying, but Baylor is obsessed with watching it. While the main character, Caillou, is pretty whiny, my main issue is with his parents. They are model parents with infinite amounts of patience. They never get upset, yell, scold or do any other normal parenting thing. They make everything fun, ignore bad behavior and are always dropping what they are doing to appease Caillou. I am waiting for the day that the kiddo says to me “Caillou’s mommy wouldn’t say ‘your behavior makes mommy want to drink'”.

Again, another topic for Baylor to discuss in therapy some day.