Time for your favorite post: “What’s Baylie Up To?”!

Baylie is anything but boring these days. She’s constantly coming up with new ways to entertain herself, most of which give me a heart attack. Yesterday afternoon I tossed her in the pack-n-play and ran to the bathroom. She suddenly discovered that throwing the toys out of the pack-n-play is an amazing game – and an awesome way to get me to come running. I caught her mid throw – she had a shape sorter behind her head and was ready to launch looking quite pleased with herself. I’m thinking she’s somehow gotten herself out of the thing and has done some horrible damage to her head, only to find it was the ring toss game that had met with the floor instead of her head, thankfully.

It’s going to sound like the kid spends a lot of time in her crib when I tell you this next one, but I swear, she’s in there maybe a total of 40 minutes across the entire day! We started when she was small and now she will sit and play in her crib and listen to Baby Einstein music for about 20 minutes at a time. And any mom will tell you, 20 minutes of quiet time exclusive from nap time are golden. Usually Baylie will “read” her picture books (which might be the cutest stinking thing I’ve ever seen) and talk and bang stuff against the railings – but I found her a few weeks ago eating her crib. Not chewing it, EATING IT. There are literally grooves where here little teeth have scraped the paint away and made indentations like a rabbit or a horse or something. What is interesting is this is apparently genetic as I ate my crib –  her crib however is brand new and painted with non-toxic paint where as I probably ingested a few pounds of lead (explains a lot, I know). Thankfully there are other strange kids out there so they make a gummy cover so she can chew away without damaging her teeth or ingesting paint. But the little stinker out smarted me and has moved on to the side railings, not just the front one so it’s back to Buy Buy Baby for more!

Baylie has also figured out how to remove the child locks from the cabinets in her room. They are like a U shape and open on one end where a piece fits on and they go around the knobs thus keeping it closed. Apparently the kid has tickets to the gun show because she can strong arm the things right off. She’s gotten so good at it that it takes her less than 30 seconds to get it off. She then sits with it and chews on the device…so I guess it does baby proof the cabinet because she doesn’t go into it.

Also, her new word is saying Bear the dog’s name. I couldn’t figure it out, but finally it dawned on me because she says it a lot when she’s in her high chair. Why? Because he sits under it waiting for her to drop down some goodies. Thankfully for her, he’ll eat fruit or veggies or whatever. Sad for him is that those are the only things she’s willing to part with – cereal and cheese get double fisted into her little mouth, not one little drop makes it to the floor to her buddy! But if you listen you can hear her softly saying Bear – it comes out a little like “wear” but he gets it and comes running to see what the day’s offering is.

As predicted, she does love the pool. We’ve been three times in the last week and she’s gone from clinging to me to floating in her raft to getting dunked. She is dying to play with the other kids there – usually her favorite cousin Madi is there and willing to splash with her and she was truly missing her yesterday. She floated in her raft looking longingly at the big kids – but that looked changed when she got dunked. I won’t go as far as saying she liked it, but she didn’t cry so I think that’s a plus. She is under for less than a second but the face might be the funniest thing I’ve ever seen. Her eyes are about as big as they will get and her mouth is about as small as it will get and you can tell she’s not really sure what to think! I’m predicting she’ll be jumping off the side into my arms in about a month 🙂 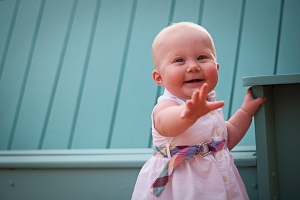