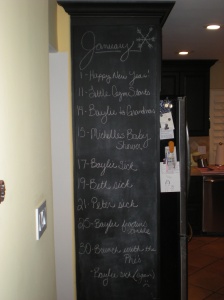 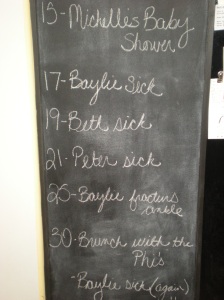 Phew. I am so happy to see February. It seems that January 2011 has turned into our “sick month”. We started out with the stomach flu two weeks ago.

Then last week, Baylie suffered a buckle fracture in her ankle. No, I was not drinking wine and ignoring the child. She was actually at the Little Gym and is trying very hard to learn to jump. She launched herself off of a 10 inch high piece of equipment and sort of decided mid jump to make it a big step instead of a jump and landed awkwardly on her left foot. I knew instantly something was wrong – she had the “I just got 4 vaccinations” cry and then she wouldn’t walk. This kid was crawling at 6 months, she lives to move especially when she’s with her buddies so for her to insist on sitting in my lap for the remainder of class was a huge red flag. Only our kid gets hurt in a literally padded room. Thankfully the doctor insists that it will be totally fine, it’s not going to affect her softball career later in life nor is it a sign on any problem with her bones. He said it’s actually pretty common and minor enough that they don’t cast it. She’s getting around fine by crawling or scooting and has been walking more and more. I caught her trying to climb into her crib yesterday to get a pacifier so I’m thinking she’s milking it a little for the extra carry time by mom and all the pacifiers she can stand.

Thinking we’ve had our fill of doctors and hospitals for the year, I was resistant to the idea that Bay was a little congested yesterday morning. I tried to blame her phlegmy cough on her yogurt but no luck. By the time she woke up from her nap she was wheezing like an asthmatic and again, only wanted to be snuggled. It’s never a good sign when she wants to sit still. 3 hours of Vick’s Plug In Vapors, the frog shaped humidifier cranked up to high and watching Baby Einstein snuggled together in her room, she climbed out of our chair and wanted to play with her kitchen set – whenever she wants to try to feed Bear T. Dog a fake hot dog, things are looking up.

I’m very much not looking forward to yet another trip to the doctor today. Mostly because I don’t want to sit on the sick kid side of the waiting room. The only other time we’ve been to the doctor for being sick (yes, we’re extremely lucky that B is almost two years old and this is the first time she’s been sick) I thought she had an ear infection so we sat on the “well” side because I didn’t want her to catch anything. I don’t think the other moms and nannys are going to take kindly to my wheezing, juicy coughing kiddo on the well side so I’m going to have to bite the bullet, sanitize our chairs and hold my breath like the big girl that I am.

Is it February yet?

One thought on “January is Not Our Month”