I hate CFL bulbs. There. I said it. I am not an environment hater, I just can’t stand the ugly, orange glow from CFL bulbs.

Don’t get me wrong, I see all the benefits of these ugly, little beasts; the cost savings, the lower use of energy, the saving of the planet, blah blah blah. All do not add up to pretty light. And yes, it does make a difference. I do not want to look like a drag queen all day because I couldn’t tell that I had too much blush on because it was drowned out by the orange light.

Not to mention that the opposite on the CFL color spectrum is so bright and sterile white, it gives me flash backs to the operating room when Baylor was born.

The solution? GE Reveal CFL bulbs. We have bought two forms of these now and I love the color. Yes, it still has a little of the orange glow when the bulb is warming up, but not so harsh as it’s offensive CFL friends.  And we put a flood light version in the kitchen and it blends in seamlessly with it’s incandesent cousins.

See? Not to shabby: 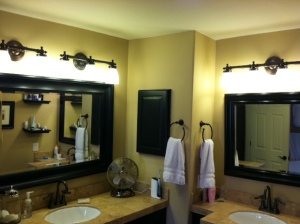 So if you would like to save the environment and a few dollars without sacrificing your mental state to orange light, try a few of the GE Reveal versions of CFL bulbs. Your non-drag queen looking self will thank me.

One thought on “Why Does Saving the Planet Have to be so Ugly?”