Growing up, we had the most beautiful nativity scene. It was all carved wood and was incredibly detailed and had so many people – it was like a religious Barbie house to me. I loved playing with it. I like staging all the figurines, hiding baby Jesus and enjoying every minute of it.

As an adult, I had a hard time finding an equally beautiful manger scene that was kid friendly. But then I came across a hand-made set at a silent auction for Circle the City charity (amazing amazing amazing. If you don’t know, find out). I was stalking a bid I had made on a bedding set for Baylor and noticed the adorable figures. They are all knitted and include the three wise men, shepherds and sheep, a donkey, camel and of course the holy family and an angel. The auction was closed for it, so I asked the lady collecting the cards if she could give me the information for the person who made them. The lady said she didn’t have it, but if I would give her my info, she would have the lady contact me.

Flash forward 3 months and I got a call from Sister Joan. I had no idea who sister Joan was, but when a nun calls you, you listen. She explained she was driving to Arizona from California and that she had my manger scene for me. Huh? I confirmed that it was for me and not someone else since I had only been interested in knowing how much one cost…and yet now I apparently owned one. Or at least I was going to own one, once I knew how much it cost. To keep it brief, I almost drove off the road when Sister Joan told me what the winning bid was for the nativity scene at the silent auction. But she then told me that the lady who make the scenes donates them to Circle the City so whatever amount I wanted to donate was perfectly fine. I decided on a number that didn’t make me want to choke and handed over the check and collected my goodies.

Bottom line? Worth every penny. The best part about the figurines  is that there is not much that could destroy them so Bay is free to play to her heart’s content. She had baby Jesus in her baby buggy and was pushing him around because “His mommy Mary said it was ok”. Just love it. 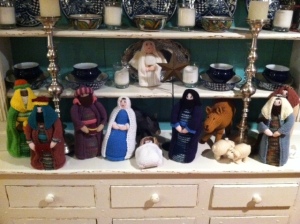 The whole gang..happy at home in the hutch. 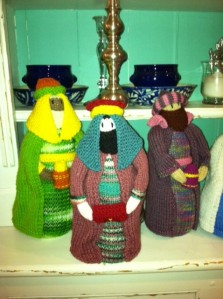 The shepherds and the camel

The Fam – I love the donkey hiding behind them!