Last Thursday everyone started feeling crummy…lots of sneezing, sore throats, stuffy noses all around. And of course, Baylor’s mystery cough was still present. Auggie’s tear ducts seemed to be infected (again) so we did a family trip to the doctor. An ear infection, a possible sinus infection, low oxygen levels and an eye infection were the diagnosis (and that was just the kids!). Four prescriptions later, we were out the door and on a first name basis with the lovely pharmacist at CVS.

Medicating the team is literally a full time gig. Antibiotics can’t be taken with reflux medicine. Probiotics needed to keep the antibiotics from killing off even the good bacteria…it’s a process to say the least. Also, see the white thing in the top of the big bottle? This is the greatest invention ever – it has a tiny hole that the measuring thing fits into so you can get every last drop of medicine without spilling! 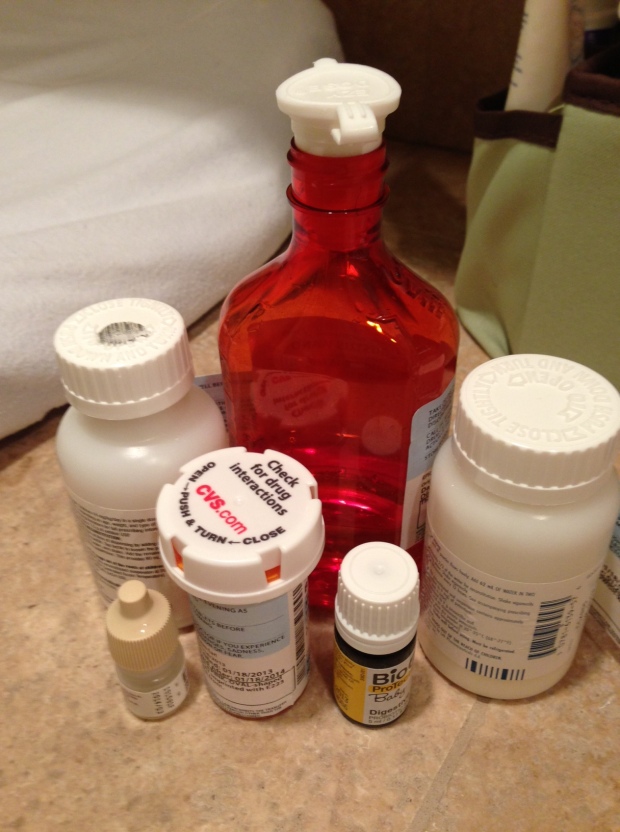 Auggie has been sleeping in his car seat in our room for a week – it’s the only way he can sleep because if he is laying down, he gets stuffed up and wakes up. Last night I found him like this: 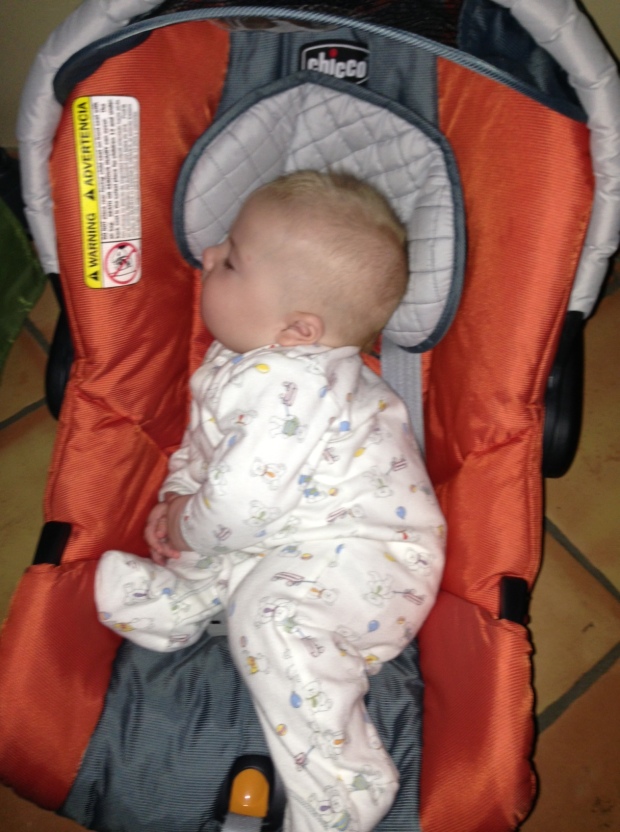 Which I took to mean he was ready to get back to his crib. I elevated the mattress and he slept the entire night in there – although he didn’t sleep the entire night. I don’t know if he’s having a growth spurt or catching up from not eating much last week – man that kid can really pack it away. He’s had two long naps today so fingers crossed, if it’s a growth spurt, we’ve entered the sleepy phase. 5 hour sleep stretches please come back!!

I broke down on Tuesday and called in reinforcements so I could go to the doctor. I took whichever doctor was available and got the guy who was going to solve all my problems. After 5 minutes of scrolling through my history he deduced that I go to the doctor approximately 4 times a year with a sinus infection. It took all my strength not to say “yeah. I know because I’M THE ONE WITH THE SINUS INFECTION”. He decided (after looking at what kind of health insurance I have – i.e. the kind that would pay for a lot of crap) that I needed an x-ray of my head. I did explain that I would do pretty much whatever he wanted as long as he promised me right now that I could have antibiotics and whatever else would make my teeth stop feeling like they were going to pop out of my mouth. 4 x-rays later he proclaimed “see that little, tiny, sliver of black right there? That’s your nasal airway. You really cannot breathe!!”. If I had had slept in increments longer than 90 minutes the night before, I very well might have punched him. He made good on his promise and loaded me up with the good stuff and 48 hours later, I’m feeling much improved. I still can’t smell, but I can breathe so I’ve got that going for me. And around here, sometimes it’s not a bad thing not to be able to smell anything…I go back in 2 weeks to have my head re x-rayed to look for an underlying cause of reoccurring sinus infections. I know Peter is dying to let out all the “you need your head examend  jokes he can think of.

Oh. And Auggie’s eye infection? Totally pink eye. And we all got it (except Peter, damn him). Talk about insult to injury. The smell of Vick’s Vapo Rub and bleach is almost visible around our house.